A 32 mm or 45 mm gauge  kit of one of the Talyllyn Railway’s narrow gauge diesel locomotives.

This Ruston 44HP locomotive was purchased by the Talyllyn Railway in 1957 and contains parts that were cannibalised off an identical locomotive. It was named after the Midlands area group of the preservation society that donated the locomotive. Please note that the Talyllyn Railway Midlander locomotive has been rebuilt several times over the years and our model is of  Midlander’s original form. I.e. the extended buffer beams with side buffers but with the original cab and bonnet.

Our Talyllyn Railway Midlander locomotive features four wheel drive from a 12 volt motor worm and chain drive. We have found the model runs quite happily either on either a 6 or 9 volt battery. The kit has been designed for easy assembly with the major components being held together with nuts and bolts; thus greatly simplifying painting. 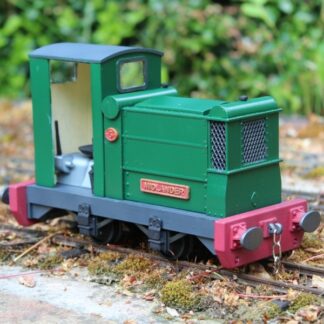